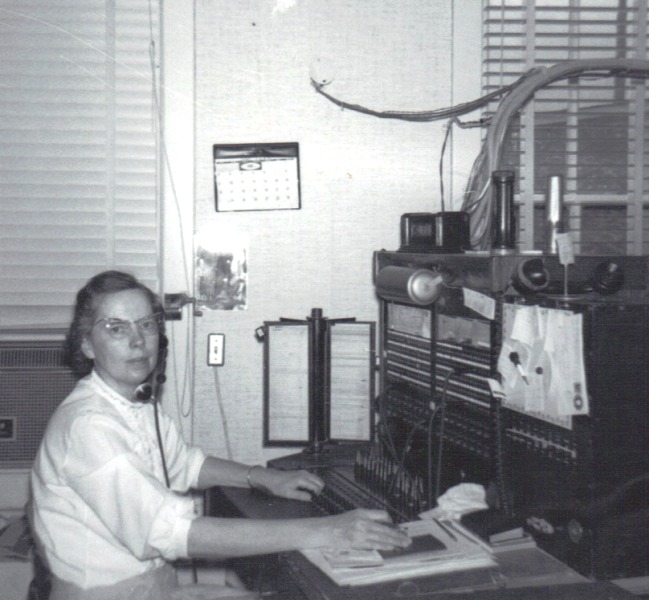 When I was almost 12-years-old, my family moved from the farm to an apartment adjoining the local telephone company switchboard and office.  The building was tin and in the summer months our living quarters felt like a metal oven.  Only the phone office had a window air conditioning unit.

Mother was the new office manager of one of the last pre-dial phone systems in the United States.  She had two operators to help her six to nine hours a day.  The remainder of the fifteen to eighteen hours she answered calls, “Number please.”  Mother also did all the billing and cleaning.  The only other employee was a part-time lineman who worked for the railroad full time.

Farm homes still had wooden, box phones and individual telephone rings made up of longs and shorts.  On the farm we answered to two long rings and two short rings on line seven.  The jingle alerted homemakers to their neighbor’s calls and “listening in” was a favorite pastime – a pastime all denied!

Residents were respectful of the night rule: no calls after ten o’clock or before seven in the morning.  Exceptions to the rules were made for emergencies, railroader calls to report for work, and student calls for rides home following high school sporting events.

Railroaders daily called the operator and told her he was going for a haircut or to the drug store for coffee.  If a call for work presented itself, the operator sent the call to the railroader’s location.  Of course, there was no fee for the answering service – just the neighborly thing to do.

City dwellers in Hope, Kansas who lifted their receivers triggered a light on the switchboard.  If a senior citizen’s light came on and there was no verbal response, mother would contact their family or send my father out to knock on their door.

The relationship between the phone office and the residents was civility at its best.  The community supported the phone office team and the operators made every effort to do what was best for the locals.  No one screamed, “Not my job description!”